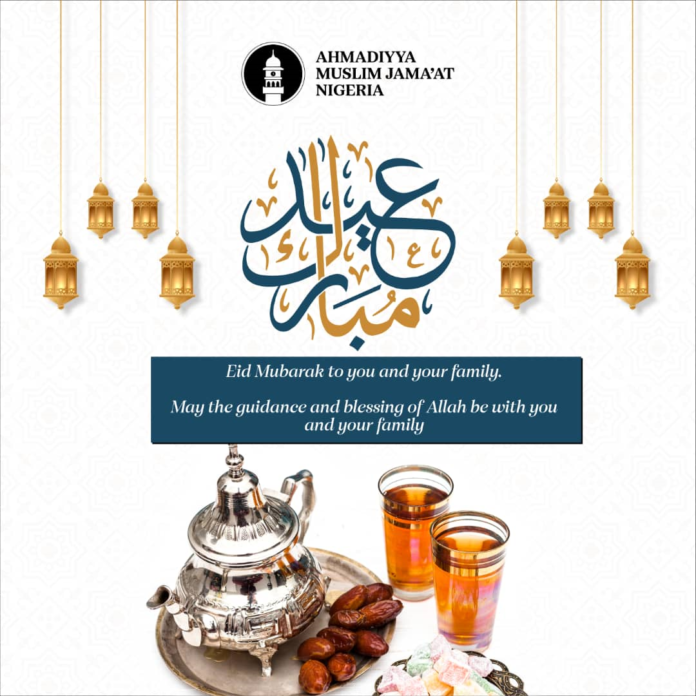 On behalf of Ahmadiyya Muslim Jama’at of Nigeria, I felicitate with Muslims in Nigeria and across the world on the auspicious Eid-ul-Adha (Festival of Sacrifice) of this year 1443/2022.

It is gratifying that Eid-ul-Adha serves as a reminder of that example of sacrifice set over 4,000 years ago. Despite so much time having elapsed, the believers have kept this memory alive and it has not diminished. Yet there will be those who celebrate this Eid merely as a festival; who sacrifice animals merely as an occasion of happiness. However, a true believer must remember the importance and the spirit of that sacrifice offered by the Great Patriarch, the Prophet Ibraheem (peace be on him). The spirit and essence of this sacrifice have been declared in chapter 22 verse 38 of the Holy Quran thus:

“Their flesh reaches not Allah, nor does their blood, but it is your righteousness that reaches Him. Thus, has He subjected them to you that you may glorify Allah for His guiding you. And give glad tidings to those who do good.”

In this light, as we go through this festive season, it is imperative that we reflect on the fact that the narrative of the sacrifice and righteousness of Prophet Ibraheem, the patience of Prophet Isma’eel, and the fortitude of his mother, Hagar reverberates the core ethos and virtues that Eid-ul-Adha annually enlivens in the consciousness of the faithful to emulate and demonstrate in our divine-human relationship and in all ramifications of our actions, reactions, interactions, and transactions.

More importantly, for us in Nigeria, there is no doubt that we are currently passing through a critical time as a people and a nation. This is hallmarked by the gamut of challenges of political economy, endemic corruption, crippling educational and power sectors, and the heightening crisis of insecurity characterized by the dastardly acts of banditry, terrorism, and the incessant heinous cases of kidnapping for ransom and for ritual and the senseless killings and destructions by the so-called “unknown gunmen”.

Above all, however, as we move closer to the Osun State governorship election and the ultimate 2023 general elections, the ongoing electioneering season is gradually witnessing a sharp surge of issues associated with elections in Nigeria, ranging from hate speech and fake news to bitter and dirty politics, to secessionist or separatist jingoism, divisive tribal or ethnic partisanship, the politicization of religious issues and endemic cases of vote-trading and other election malpractices.

In the face of this critical situation, it becomes imperative for a people that yarns for peace and development to translate to affirmative action all the lessons of Eid-ul- Adha as demonstrated by the Prophet Ibraheem, particularly as Muslim and Christian reverence him as the Father of the faithful; incidentally, Nigeria is majorly made up of the two religious groups with 53.5% Muslim, 45.9% Christian and 6% others, according to the 2018 CIA Factbook estimate.

In the spirit of Abrahamic sacrifice and for the sake of a greater and peaceful Nigeria, great sacrifice must be made towards organizing free, fair, credible and peaceful elections, as “Verily, Allah commands you to make over the trusts to those entitled to them, and that, when you judge between men, you judge with justice,” (Quran, 4:59).

Selfishness and parochial interest must be sacrificed for the collective, national interest. More so, political participation, activism, leadership and governance must be underpinned by the spirit of sacrifice, righteousness, sincerity of purpose and selfless service to humanity and national development, cohesion, solidarity, peace and stability. Imperatively, Nigerian politicians and political leaders must sacrifice dirty and bitter politics on the alter of altruistic politics, selfish political godfatherism for patriotic statesmanship, political thuggery for sportsmanship, nepotism and favouritism for equitable distribution of the commonwealth, warfare for welfare, iniquity for equity and injustice for justice.

May Allah the Almighty grant us the best of Eid-ul-Adha experiences with all the divine grace, peace, and happiness that accompanies it. Āmīn!