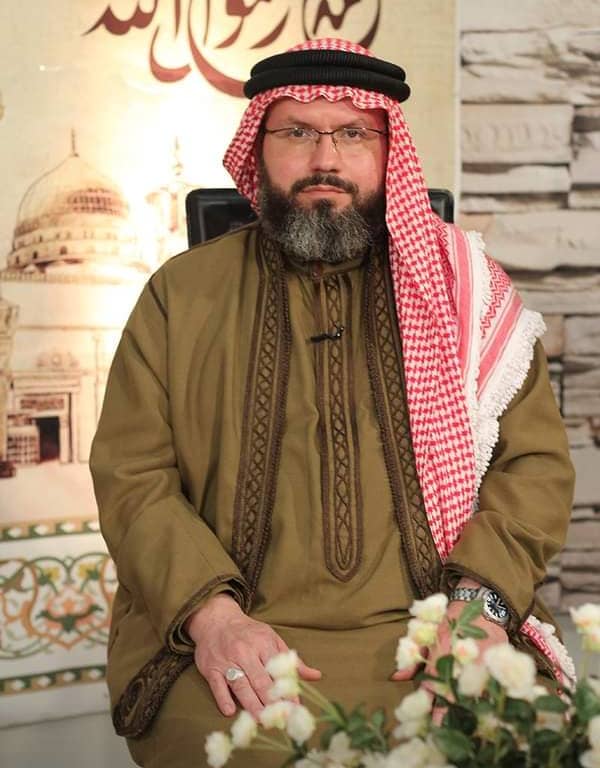 By the end of 2013, my mother had suffered horrible pains due to cancer. Her condition had deteriorated that we had to call my brothers abroad to be with her in her last days or moments, especially since all the physical signs had shown obviously that the end of my beloved mother was close.

During those critical days, it happened that I was supposed to travel to the UK for ‘Alhiwar Almubashir’ (The Live Dialogue) TV program on MTA (Muslim Television Ahmadiyya). Though I’m a regular panelist in this program, I hadn’t presented previously any excuses for not attending the program, nor had asked Huzur (Hazrat Mirza Masroor Ahmad, the Fifth Khalifa of the Promised Massiah, the Head of the Worldwide Ahmadiyya Community) for the permission to stay with my mother, whose health had reached the irreversible stage of multiple organ failure.

Despite all, I decided to travel entrusting myself to Allah Almighty. I told my mother about my decision, and also told her that, if she didn’t want me to travel, I would cancel the flight and would do what was needed to stay with her.  She said: ’Go, trust Allah’.

I had visited her on the eve of my flight to the UK to say goodbye, thinking that I would never see her again. I told myself that it might be Allah’s will to have mercy on me, and not to suffer witnessing her death and burial. My attitude seemed inexplicable to many: my brothers had come back from abroad, then, I wanted to leave!

I had kept contacting my brothers and sisters till the last moment before the plane took off. They said she had been suffering what seemed agony of death, although she had few short moments of consciousness.

As I arrived at Heathrow Airport, I immediately phoned my family to check out my mother. They informed me she has become closer to death. That restless situation, the phone calls, the tension, and the fear of the inevitable end had made me concerned to the extent that I had forgotten my hand luggage with my passports as well in the trolley without noticing- as I was still on the phone when I rode the car – till I reached my residence. I restored this bag miraculously the next day (This is another remarkable story that I will tell later).

Huzur (May Allah be his helper) had been informed about the deteriorated condition of my mother. He blamed me in my first meeting with him for traveling and said that I should have stayed with her. I told him that I had asked her and she preferred that I would not quit the honor of Jihad even at those critical last moments of her life.

Then, by the end of my visit, and before my flight back to Jordan, I had met Huzur (May Allah be his Helper) again. We both spoke in English in the meeting, He said with kindness: How is the “Walidah” (a very respective way of mentioning the mother, which is an Arabic word and became an Urdu word too).

I replied, ‘Huzur, she is in the terminal state!

I meant that she is leaving us any time soon, based on what I had been told by my brothers and the medical reports. However, I had felt that it was not appropriate to be sure about the death of any person based on the apparent physical causes that do not bind Allah’s will Who owns life and death. Then, clarifying, I said: “But, if it is Allah’s decree to revive her, that is another issue…” At that moment I felt that Huzur (May Allah be his Helper) was looking at me with a special glorified divine look. He didn’t talk and I, too, kept silent. I felt that Allah Almighty’s decree had fulfilled something. It was a very special moment!

Before leaving London, I had phoned my brothers and sisters. They said she was alive and that she slightly looked a little better. I had flown back to Amman post-midnight. So, I had to visit her the next morning.

The next morning, my brothers told me that the doctors had discharged her. So, instead of going to the hospital, I went to the family home. A few minutes after my arrival, the ambulance had dropped her home. She seemed better. I left her to rest and, then, talked to her.

She cried as she told me about the remarkable vision she had seen during her last day in the hospital.

“I saw an angel roaming around in the room. The angel stopped at my bed. I felt that he has come to take me. So, I recited the Shahada (I bear witness There is no god but God. Muhammad is the messenger of God). Then, I heard loud voices of many people screaming my name. Thereafter, I heard a voice saying: ‘Prophet Mohammed is here!”

“Your son Tamim saved you, he loves Allah and His Prophet.”

“Then, the scene faded and I got better as you can see now”.

She had never stopped crying as she was asking my brothers to follow what I follow i.e. to believe in the truth of Hazrat Mirza Ghulam Ahmad, the Promised Massiah and Mahdi (Peace be upon Him), and embrace the Ahmadiyya community.

Although she signed Bai’at long years ago, and she had believed in the truthfulness of Ahmadiyya ever since after she had seen a clear dream, but I think that Allah Almighty wanted to keep her faith firmer.

She told all the people who had visited her about this vision, and that she was in full conscience when she had that experience. Her general health got better; that she was able to eat again, and even regained the ability to walk a few steps. Afterward, my brothers traveled back to their jobs.

My mother had lived for forty days after that remarkable sign took place. Although her health had deteriorated in the last three days, she passed away in peace after she had fulfilled her message confidently.

That vision should not be ascribed to the muddled dreams of some patients, because what happened after was obvious and strong. My mother’s health had got better and she had lived for forty days contrary to medical reports and what everybody thought that she had reached death. Allah Almighty had shown me the restoration of life to the dead to set my heart and mindfully at rest and not to doubt His Power. Despite that, when I had told Huzur (may Allah be his Helper) that my mother would die, I hadn’t doubted Allah’s power, but I shouldn’t have said so.

Many close friends knew about this special incident. I didn’t want to talk about it earlier, and I still don’t, but the sincere intention to proclaim the grace of Allah Almighty and present people some small evidence of the truthfulness of our Imam Mahdi (peace be on him); and that we receive the same blessings that the early Muslim believers had received, encouraged me to write.

Signs and good tidings are commonly bestowed upon our Jamaat (Ahmadiyya Muslim Community) by the grace of Allah. There are many signs all Ahmadis and their relatives have witnessed. Every Ahmadi family has seen these signs and good tidings all the time. They always share these stories in their meetings and sittings. Actually, these had been a means to strengthen their faith and establish their firm belief in the imminent conquest of Islam.