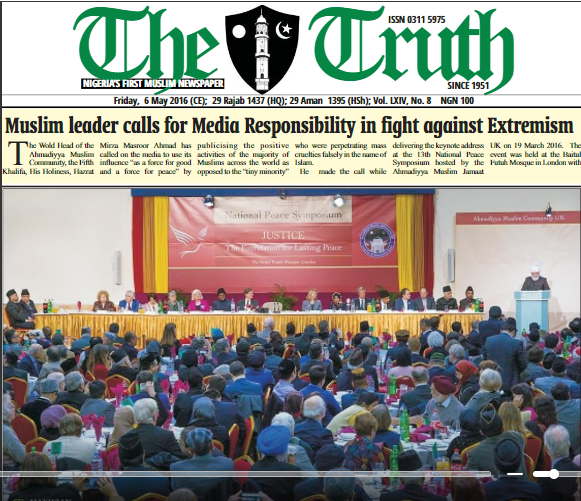 Just like the Presbyterian Reverend, Henry Townsend had pioneered the first-ever newspaper in Nigeria with the founding of Iwe Iroyin in 1859 (Philip Onuoha (2015), History of Nigerian Mass Media, National Open University of Nigeria, p. 21), The Truth Newspaper enjoys historical relevance of being the first and longest-running Muslim Newspaper established in Nigeria seventy years ago, precisely, in December 1951, by the prominent expatriate Muslim Missionary and Journalist, Maulvi Naseem Saifi Sahib.
Maulvi Saifi Sahib served as the Chief Missionary of the Ahmadiyya Muslim Jamaat in Nigeria and West Africa for twenty years, from 1946 through 1966. As such, The Truth Newspaper was not only used as an official newspaper of the Ahmadiyya Muslim Community, but has ever been used as a means of actualizing media contribution of Islam to the religious, literary, social, and educational development of Nigeria in particular, and humanity, in general.
It is interesting to note that, initially, the newspaper was being published monthly and entitled The Nigeria Ahmadiyya Bulletin from August through November 1951 (The Nigeria Ahmadiyya Bulletin, The Nigeria Branch of the Sadr Anjuman Ahmadiyya, Qadian, September 1951, Vol 1. No. 2.) It, however, acquired its nomenclature of The Truth in December of the same year, and, subsequently, began to publish weekly henceforth (The Truth Newspaper, December 1951, Vol. 1, No. 1).

More interestingly, a host of historians and chroniclers of the history of media in Nigeria have reckoned with the pioneering place of The Truth Newspaper in the trajectory of Muslim newspapers publication in Nigeria. For instance, in the page 26th of his pioneering work published in 1968 and titled, Landmarks of the Nigerian Press – An Outline of the Origins and Development of the Newspaper Press in Nigeria (1859 to 1965), the renowned media scholar and practitioner, Increase H. E. Coker acknowledged that “The only regular Muslim newspaper was the one started in Lagos at this period and entitled Truth. It was pioneered by the Ahmadiyya Movement in Islam, Lagos branch, which continues to subsidize its production.”

Incidentally, Ahmadiyya is also reputed for pioneering in Nigeria the first Muslim-established school that combined both Islamic and secular education. Again, it also pioneered Muslim hospitals through the establishment of the first Muslim medical dispensary in Nigeria in 1961 and continues to run a number of schools and hospitals, and clinics across various states in the country till today. (Centenary History of Ahmadiyya Muslim Jamaat in Nigeria, Ahmadiyya Muslim Jamaat Nigeria, (2016), p. 175).

To continue with our tracking of the memory lane of The Truth Newspaper, it is exciting to note that the noble mission of this Newspaper, as stated by the veteran journalist-founder in its maiden edition, is that it aims at “calling humanity toward the Creator of the Universe” and “inviting every soul to the fountainhead of peace – Islam.” This is “the message that THE TRUTH has pledged to impart to every soul in West Africa in particular and the rest of the world in general” (Our Message, Editorial, The Truth Newspaper, December 1951, Vol. 1, No. 1, p.3).

From any evaluation of media history in Nigeria, three factors should evidence the long history of media relevance, contribution, and popularity of the The Truth in Nigeria: (1) the fact that, regardless of being a foreigner, its founder was elected as the first Vice-President of the Nigeria Union of Journalists for many years, the Treasurer of the Nigerian Press Club and an Executive Member of the Guild of Newspaper Editors (Naseem Saifi, My Hearty Thanks, The Truth Newspaper, Friday, 5th August 2016, p.13).      His contemporaries in the newspapers industry are the revered Segun Osoba, Late Alhaji Kayode Jakande( John West)  Late Bisi Onabanjo( Ayekoto Fame) Late Alade Odunewu( Allah De)Late Muslim Kola Animashaun ( The Voice of Reason, Late Bisi Lawrence( BizLaw).

Secondly, that the first Nigerian staff of The Truth Newspaper, Mr. Yisa A. Safi, was offered Federal Government Scholarship for journalism at the then London Polytechnic in October 1953 by the then British Colonial Administration in recognition of the contributions of The Truth in Nigeria.  At the completion of the study, he returned to serve the country under the Federal Ministry of Information till his death in 1969 (Z.O. Elias, First Nigerian Ahmadi to Serve The Truth Passed Away, The Truth, Friday, MAY 30 – June 5, 1969, p. 7).

Thirdly, and in contemporary history, the current chairman of the editorial board of The Truth Newspaper, Dr. Qasim Akinreti, has been the Chairman of the Nigeria Union of Journalists, NUJ, Lagos State Council from 2017 through December 6, 2020. He is a member Nigerian Guild of Editors, NGE, and The International Press Institute, IPI. Dr Akinreti has contributed his quota to the growth of the Nigerian media through practice and teaching and research. One of his latest co-authored books is entitled “The Secrets of Online/Multimedia Journalism: A handbook for African Journalists. Currently, he is the Deputy Editor of Digital Media, Voice of Nigeria.

From the above, it is not surprising that Maulvi Naseem Saifi once reminisced how, while traveling by sea in the company of Nigeria’s first indigenous President, Nnamdi Azikwe, (himself a journalist and publisher of the renowned nationalist newspaper, The Pilot), he “was surprised to hear him (Azikwe) talk about The Truth; he knew almost everything about it, even the press where it is printed.” (Naseem Saifi, My Hearty Thanks, The Truth Newspaper, Friday, 5th August, 2016, p.13).

Today, taking the advantages offered by the postmodern-day Information Communication Technology (ICT) through online journalism, The Truth Newspaper has since 2016 begun its online publication via www.thetruth.ng. This has continued to avail the immediacy, frequency, and global reach of its publication. Observably, through its news stories, editorials, features, and opinion columns, etc., the newspaper has been renowned for its coverage of a wide range of issues of religious, social, health, and educational relevance in Nigeria, over the years.

Al-Hafiz Yunus Omotayo is a Missionary of Ahmadiyya Muslim Jama’at of Nigeria and Correspondent of The Truth Newspaper. E-mail: al-hafiz@thetruth.ng