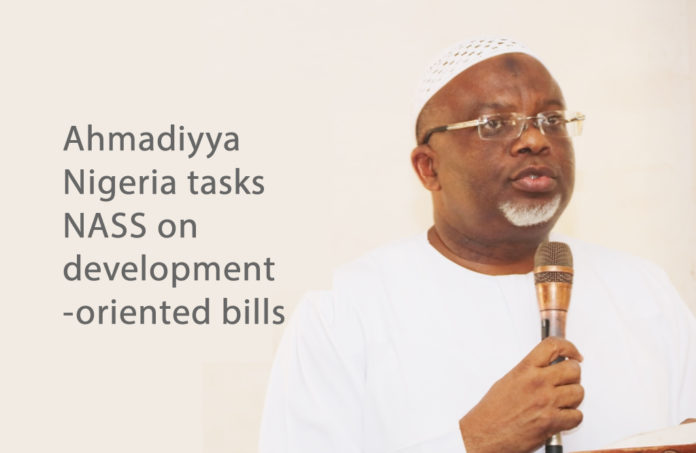 The National Amir (President) of the Ahmadiyya Muslim Jama’at Nigeria, Alhaji (Barr) Abdul Azeez Folorunso Alatoye, has urged the National Assembly (NASS) to focus on bills and issues that improves the well-being of the people of the country.

Azeez made this call while reacting to issues on the state of the nation during a press briefing to announce the forthcoming 67th Jalsa Salana (Islamic conference) of the Ahmadiyya Muslim Community. Alatoye enjoined the legislators to focus more on bills about developments in all facets of Nigerian life rather than being distracted with the Social Media and Hate Speech Bills.

“It is of great importance to focus on issues that affects the people directly rather than legislating on issues that has already be catered for in the constitution of the country,” he said.He noted that there is enough provision in the constitution that cater for what the National Assembly is giving attention as of now.
“As a lawyer, I believe there are enough extant laws in the Nigerian constitution that adequately take care of these two bills. At present we have libel law and defamation, cybercrime law and other criminal laws that can effectively accommodate any misdemeanor on the use of social media platforms and extreme comments capable of inflaming passions and causing disunity in the country.”

He further stated that the democratic system of government that the country runs is expected to have the interest and welfare of the people at heart. Thus, much attention should be given to the welfare the people and policies that will aid the development of the people.

He urged the National Assembly not to get distracted with things the constitution has already taken care of.“Since democracy is about the people, I urge the National Assembly to focus more on bills about developments in all facets of Nigerian life rather than being distracted with the Social Media and Hate Speech Bills.”
Meanwhile, Alatoye appreciated the effort of the Federal Government on the infrastructural development of the country and urged them to do more for the good of the citizenry.He said: “The Ahmadiyya Muslim Community in Nigeria commends the commitment of the Nigerian Government to the railway transportation system. The free railway transportation between Lagos and Abeokuta is laudable. We urge the government to exert the same positive attitude to general infrastructural developments across the country.”’

In line with the core values of the Ahmadiyya Muslim Community “Love for all Hatred for None”, the 2019 edition of Jalsa Salana slated for 20th December to 22nd December will focus on the Holy Quran Chapter 16 verse 126 “Call unto the way of thy Lord with wisdom and goodly exhortation, and argue with them in a way that is best. Surely, thy Lord knows best who has strayed from his way, and He knows those who are rightly guided”.

Highlights of the two-day events are praises of Allah and the Holy Prophet Muhammad (saw), message from the Worldwide Head of the Ahmadiyya Community, Goodwill messages from the Nigerian President and State Officials, Religious Leaders, Lectures, Special Prayers, and Academic Awards.