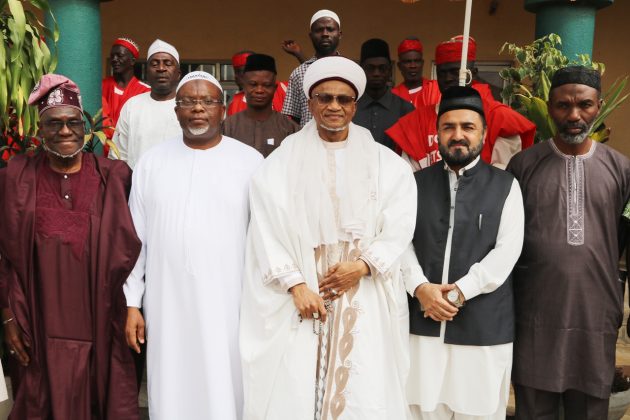 The Etsu Nupe and the Chairman Niger State Council of Traditional Rulers, His Royal Highness, Alhaji (Dr.) Yahaya Abubakar, CFR has revealed the major reason for honouring the invitation to attend the International Convention of the Ahmadiyya Muslim Community held in the United Kingdom last year.

Speaking at his Royal Palace in Bida, Niger State during the visit of the National leadership of the Ahmadiyya Muslim Jama’at Nigeria led by the Amir (National President), Alhaji (Barr.) Alatoye Folorunso Azeez, the traditional ruler disclosed that the inner impetus to have first-hand information thereby correcting the wrong impression about the Muslim Community made him attend the Conference.

It would be recalled that the Etsu Nupe with other four members of his family attended the 2019 Annual Convention in the U.K. where they were given a befitting reception, and also had the rare privilege of meeting the Supreme Head of Ahmadiyya Muslim Community, Hadhrat Mirza Masroor Ahmad(May Allah be his Helper).

Dr. Abubakar expressed his delight over his experience in the U.K. as he was able to ascertain the truth about the Ahmadiyya Muslim Community and its belief system which were in conformity with the tenets and true teachings of Islam. He affirmed that those attacking the Muslim organization are ignorant of its belief system and activities. Consequent to his findings, the traditional ruler informed that he summoned all leaders of Muslim sects in his domain and educated them properly.

His words: “The motive behind attending the international convention of the Ahmadiyya Muslim Community in the U.K. was to actually seal the trust I had in the Jama’at and to have some clues about her belief system. I got to know that the organization believe in one God and that the Holy Prophet(Sallallahu alaehim wasalam ( was the seal of all prophets. The Community also promotes peaceful co-existence which Islam preaches, so what else?

“I was really impressed and convinced after that visit. Those giving wrong allegations and are attacking the Ahmadiyya Community do that out of ignorance and sensitization. I had to gather all the leaders of Muslim organizations in my Kingdom to the palace and educate them properly after my arrival from the United Kingdom. Ever since then, they (Muslim leaders) have changed positively and are now relating to themselves peacefully.”

The Etsu Nupe admonished religious leaders generally to eschew all forms of hate speech and disseminate the true teachings of Islam, notably the Peace Message which the Ahmadiyya Jama’at preaches across the globe.

“Before now, some of these scholars spent much time preaching against other sects than the time spent on disseminating true teachings of Islam. This trend has changed anyway after the orientation. Let us preach on five daily prayers, Hajj, and current affairs in the society. Avoid hate speech and re-awaken followers on Islamic affairs. Let us always appreciate what God has given us and refrain from anger, jealousy, envy and embrace peaceful co-existence. This will no doubt improve the spirit of brotherhood among us,” he opined.
Highlights of Amir’s Speech:

Barrister Alatoye while delivering his speech expressed his profound gratitude to the Etsu Nupe for honoring the 2019 U.K. Jalsa Salana (Annual Convention) which has further bolstered the Jama’at’s relationship with members of Nupe Kingdom.

He further solicited the Etsu’s full support and cooperation towards disseminating the peaceful message of the Jama’at across the country, taking into consideration current happenings in international politics.

“We thank His Royal Highness for attending our international Jalsa Salana 2019 in the U.K. It’s a huge blessing for the Jama’at in all sectors. Let me use the opportunity to emphasize that the Ahmadiyya Community is very much concerned about the spreading of a peaceful message. That is why His Holiness has been moving across the world to deliver peace messages to world leaders. Aside from this, the Jama’at is also concerned about the welfare of the masses, hence the establishment of Humanity First International which focuses on the provision of food, shelter, health services, education, disaster recovery, among others for the less-privileged. We humbly request for His Royal Highness’ full support for the actualization of these programmes, starting with the spreading of peace messages across Nigeria,” Barrister Alatoye requested.

His Holiness(May Allah be his Helper) Visit to Nigeria:

Barrister Alatoye later prayed for the protection of lives and properties and abundance of blessings in the Nupe Kingdom. He then presented Jama’at literature and other gift items to the Monarch.

Some of the entourage of Amir include the Missionary Incharge, Maulana Afzaal Ahmad Rauf; the General Secretary, Alhaji Abbas Iromini and the National Secretary External Affairs, Alhaji Hassan Sunmonu.