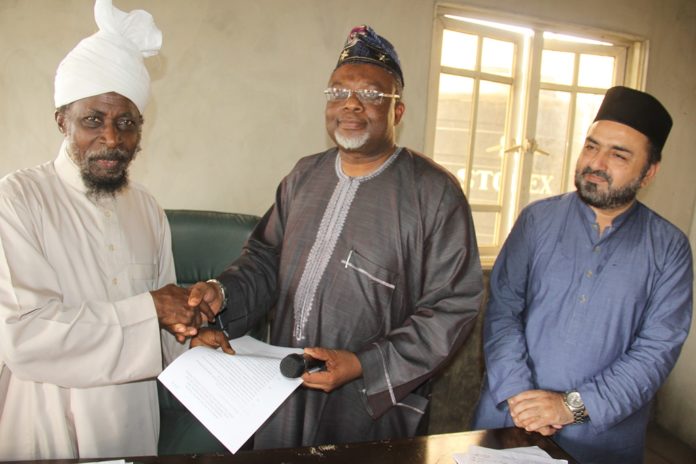 The new Amir (National Head) of Ahmadiyya Muslim Jamaat Nigeria Alhaji AbdulAzeez Folorunso Alatoye has called for unalloyed teamwork, rededication and overwhelming support of the National Executive officers and members of the Muslim organization in an effort to achieve a successful and hitch free administration.

Alhaji Alatoye who resumes office on Monday 1st July 2019 made the call at the handing over ceremony held at the National Headquarters of the organization in Ojokoro, Lagos.

It would be recalled that the Supreme Head of Ahmadiyya Community worldwide appointed Barrister Alatoye after the last shoora to succeed Dr. Mashhud Adenrele Fashola who had been at the helms of affairs for 15years.

In his speech, the new Amir who is a lawyer and tax consultant by profession opined that his administration will consolidate on the achievements and legacies of the immediate past regime and improved on them. This, he said, can only be achieved through total commitment and cooperation of all members.

He thanked the former Amir for giving him the opportunity to have served in the capacity of Naib Amir (Deputy Head) for years and believed the system and administration of the organization is a continuum.

The Amir, therefore, urged the incoming national executive members to be ready for the enormous task ahead.

According to him, “ I have to commend Dr. Fashola for successfully steering the ship of the Ahmadiyya community in Nigeria for 15years. I have known him to be a strong individual and a spiritual person who is also energetic. The Jamaat is always proud of him in all respect. No doubt, the position of the Amir is an enormous task. The head can only succeed with the collective support of everyone. The system of the organization is a continuity,” he concluded.

Barrister Alatoye assured that the new regime will strive to improve on whatever is on the ground in the interest of the Jamaat and not for personal gains. Hence, he charged the executive officers and everyone to work positively going forward.

He noted that “ mindset is how do we improve on what we are doing now. If you pick any concept, there would be many approaches to that concept. We need to reposition ourselves. I will also request that we reduce arguments on issues and most importantly, refer ambiguous issues to the spiritual head of the Ahmadiyya community and His Holiness for guidance and clarification. We must implement all the instructions of Huzur Aqdas (May Allah be his Helper), the Amir counseled.

In his speech, Dr. Fashola said the Muslim organization was in safe hands with the new Amir and promised to give his full support for a successful regime. ” Alhaji Alatoye is a blessed person by all standards. He is a man of discipline, a man of God and a prayer warrior. He has all the qualities and attributes of a good leader. I will give him all the support needed because he also supported me a lot,” he said.

and Alhaji Z. A Junaid handed over to Engineer Shakirudeen Abdussalam as the National Secretary Wasayya (Wills).

Among the dignitaries present at the ceremony include the Missionary In-charge Maulvi Afzal Ahmad Rauf;