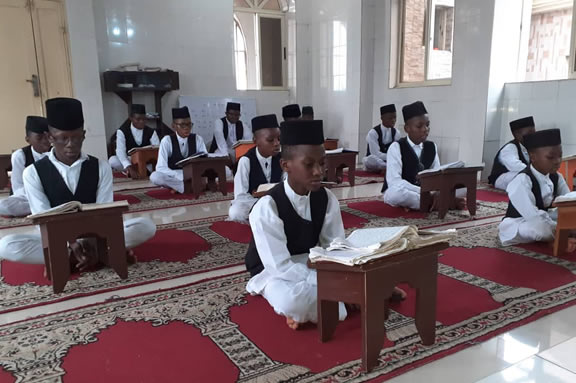 To the Muslim children, those modern psychologists who say that the ages from 9 to 21 years are the most fertile periods for memorizing things and during which the memory can effectively keep the information, have said nothing but the truth. For, this is what they could prove by way of their experience which they have been able to get through the act of memorizing the Holy Qur’an.

While both the young and old ones from among the Christians, the Hindus, and the Zoroastrians etc. have been unsuccessful to learn the entire texts of their respective Scriptures by hearts, it is a matter of fact that many Muslim children right from the earliest periods of Islam have memorized the Qur’an with ease at an age as low as 9 years. Indeed there have been hundreds of thousands of such children memorizers of the Qur’an while the number keeps on increasing every day.

In fact, as Hazrat Mirza Bashirudeen Mahmūd Ahmad (ra) noted in his Introduction to the Study of the Holy Qur’ān, it is only among Muslim communities you would find that even “children who were born blind or who lose their sight during infancy are encouraged to commit the Qur’an to memory. This is done out of a feeling that as a blind person is not competent to adopt a normal occupation he can turn his handicap to account by becoming a guardian of the text of the Qur’an.”

I see it worthwhile to relate here the story of ‘Amr bin Salama (ra) and the wonderful situation through which he committed the Qur’an to memory. Amr bin Salam was a young boy who lived during the time of the Holy Prophet (saw) but whose case is that of a little child of 7 years who had memorized large potions from the Qur’an at a time when Islam had not even reached his village and there was no Muslim living there at all, he himself has not accepted the religion at that point in time. One would definitely be interested to know how then he was able to learn the Qur’an by heart. Below is how ‘Amr himself told the story. He relates thus:

“We were at a place which was a thoroughfare for the people, and the caravans used to pass by us and we would ask them, “What is wrong with the people? Who is that man?” They would say, “That man claims that Allah has sent him (as a Messenger), that he has been inspired divinely, that Allah has revealed to him such-and-such.” I used to memorized that (Divine) Talk, and feel as if it was inculcated in my chest.

The Arabs (other than Quraish) delayed their conversion to Islam till the Conquest (of Makka). They used to say, “leave him (i.e. Muhammad (saw) and his people Quraish: if he overpowers them then he is a true Prophet.” So, when Makkah was conquered, every tribe rushed to embrace Islam, and my father hurried to embrace Islam before (the other members of) my tribe.

When my father returned from the Prophet (saw) to his tribe, he said, ‘By Allah, I have come to you from the Prophet (saw) for sure!” The Prophet (saw)afterward said to them, ‘Offer such and such Salat (prayer) at such and such time, and when the time for the Salat (prayer) becomes due, then one of you should pronounce the Adhan [for the Salat (prayer)], and let the one amongst you who knows Qur’an most, lead the Salat (prayer).” So they look for such a person and found none who knew more Qur’an than I because of the Qur’anic material which I used to learn from the caravans. They therefore made me their Imam to lead the Salat (prayer) and at that time I was a boy of six or seven years, wearing a Burda (i.e. a black square garment) proved to be very short for me and my body became partly naked. A lady from the tribe said, ‘Won’t you cover the buttocks of your reciter for us?” So they bought (a piece of cloth) and made a shirt for me. I had never been so happy with anything before as I was with that shirt.”

Truly, if the act of committing the entire Qur’an to memory is one of those distinctive glories of Muslims that make them and their Holy Scripture to be so unique among all other peoples and scriptures, then those among Muslim children who have memorized the entire Qur’an are indeed the very pride of Islam and the Qur’an because of the glory, the blessings and the good fortune which they have got.

Similarly, if it is the will of Allah that the Qur’an be preserved till the Day of Judgment through the process of committing its entire text to memory by Muslims, then again, those among Muslim children who have been able to achieve Tahfiz-ul-Qur’an in their life are, in fact, the very pride of Allah the Most Exalted because they have used their talent, time and lives to fulfill the will of Allah in this world.

Indeed such Muslim children are the delight of their parents and their future glory. They are the joy of their life and the satisfaction of their souls. And such children would indeed grow up to become the champions of Islam. Having embellished their childhood with the light of the Qur’an, they would certainly grow up to be the inheritors of the legacy of the Prophets and so become the successful and the prosperous.

Culled from p. 35-37 of my book titled: Memorization of the Holy Quran: Merits and Methods