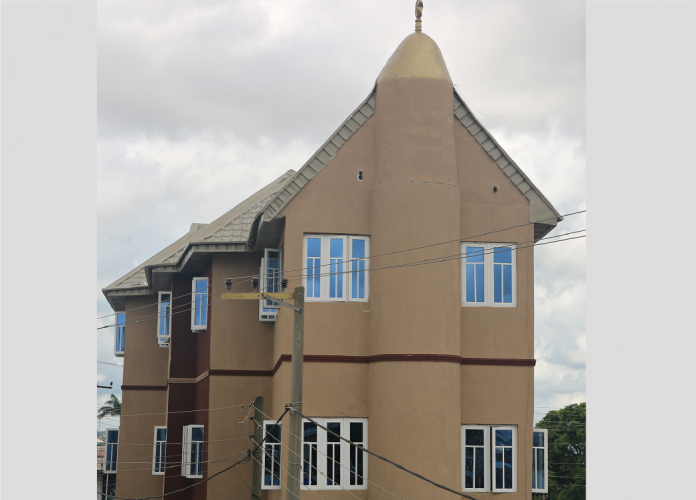 – Lays foundation of two others in Ogun State

It was a historic week for the Nigeria Branch of Ahmadiyya Muslim Community Worldwide as its National Head (Amir), Barr. Alatoye Folorunso Azeez commissioned a newly built ultra-modern Mosque in Apata (Oyo State) and a newly renovated one in Ilaro (Ogun State) respectively.

The Apata Mosque was single-handedly sponsored by a family. It is a two-storey building with the ground floor set aside for ablution area and car park.
It will be recalled that the foundation laying stone of the ultra-modern mosque was done in 21st March 2021, barely six months ago. At a go, the Mosque could accommodate about 500 worshippers.

The same donor also completed the building of a mission house at Jankata (Apata) branch of Ahmadiyya Muslim Jama’at of Nigeria. It is a well-structured three-bedroom (ensuite) apartment meant for a would-be missionary for the branch.

Similarly, the National Head also commissioned a newly renovated Ahmadiyya Muslim Jama’at Central Mosque at Igbogidi, Ilaro, Ogun State.
The foundation stone of the Mosque was laid in 2001 after the plot of land was donated by Late Pa Ajayi in the year 2000. Prominent members of the Ahmadiyya Community in Ilaro contributed immensely to the successful construction of the place of worship.

Barr. Alatoye, after praying fervently for the donors emphasized the importance of building mosques and mission houses, stressing that spiritual blessings and everlasting rewards from Almighty God are attached to the noble initiative.

He said: “It’s more rewarding if we strive to build houses for Allah than constructing so much flats for worldly financial gains. Let us follow the footsteps of companions of the Holy Prophet who constructed buildings for the sake of Allah. We should also ensure that our Mosques are well structured and attractive than even our personal houses.

“The roles of the youths in recent times towards the building of the Mosques and Mission Houses can not be over-emphasized. They are proving to be the backbone of the Ahmadiyya Community. May Allah continue to shower blessings on them.”

FOUNDATION STONE LAYING OF TWO MOSQUES AT OGUN STATE
In the same vein, the foundation stones of two ultra-modern Mosques were laid at Iyesi-Ijaba and Iju-Onibukun (Ogun State) branches of Ahmadiyya Muslim Community.

The Amir enjoined members of the Islamic body to put their trust in Almighty God alone and strive to complete the projects in no time, not minding the economic challenges facing the nation.

“It is a known fact that the nation is presently facing serious economic challenges, but we should not be bothered. We are only experiencing trying times. Almighty Allah will always pave way for his people. Let us have the mindset of completing these projects soon,” Barr. Alatoye advised.

On the way back to the National Secretariat in Lagos State, the National President and his entourage inspected the ongoing mission house project at Sabo-Ilaro. The project is a storey-building. The Amir led a special prayer at the site.

WORKING VISITS TO EDE, EJIGBO
The National Head further made short trips to Ede and Ejigbo branches of the Ahmadiyya Muslim Jama’at of Nigeria to inspect landed properties, ongoing projects and familiarise with members of the community.

In his address, Barrister Alatoye urged all and sundry to always display the good qualities of Ahmadi members and serve as role models to non-members in a bid to win more souls into the religious body.

“Let me use this medium to request our teeming members to exhibit true teachings of Islam. We must work on our morals and characters such that outsiders will be willing to join the Ahmadiyya train. Let us convert people with the best of behaviors and good neighborliness,” the Amir posited.