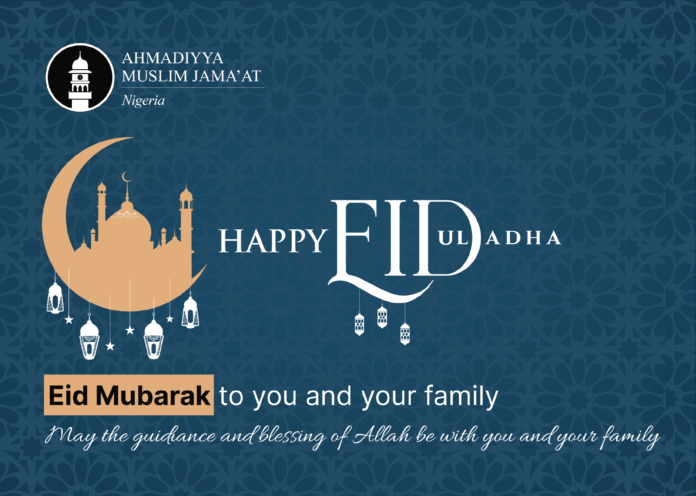 What is Eid-ul-Adha
Eid-ul-Adha is a “feast of sacrifice” or submission to the wishes or will of Allah celebrated on the 10th day of Dhul Hijja or the 12 Lunar month. It means total submission to what Allah wants or wishes or will or directs. It has two components. The smaller component is the sacrifice or killing of ram. This smaller one reminds us annually or points to a bigger sacrifice. The bigger sacrifice is the sacrifice of one wishes, will, passion, ego, and pride for the wish of Allah which is very difficult. To surrender one’s disobedient tendencies, passion for greed, or selfishness for the instructions of Allah is very difficult except for the righteous or God-fearing.

Origin of Eid-ul-Adha Sacrifice
Eid-ul-Adha or the festival of Sacrifice commemorates the obedience of Hazrat Ibrahim (as) and his son Hazrat Ismail(as) to the commandment of Allah. Hazrat Ibrahim(as) had a series of dreams in which he saw himself sacrificing his eldest son Ismail. He inferred that it was perhaps the will of God that he should sacrifice the life of his son.

Hazrat Ibrahim(as), being most obedient to God, was about to sacrifice the life of his son Ismail, when God commanded him to stop and gave him the good news that he had indeed fulfilled His command. God was so pleased with Ibrahim because of his obedience that He multiplied his progeny into billions. He was also given the great honour of being the forefather of the Holy Prophet of Islam(sa).
Those who are able to offer the sacrifice should remember the significance of doing so, as succinctly stated in chapter 22:38 of the Holy Qur’an:
Their flesh reaches not Allah, nor does their blood, but it is your righteousness that reaches Him. Thus has He subjected them to you, that you may glorify Allah for His guiding you. And give glad tidings to those who do good.”
The act of sacrifice is symbolically reminding the person who offers it that as the animal is inferior to him so he, also, is inferior to God and should, therefore, be ready to sacrifice himself and all his personal interests and inclinations for the sake of God when he is required to do so. The same applies to a Muslim who desired to offer the sacrifice but could not, for economic reasons.
The attainment of righteousness should be the goal of every Muslim. The Holy Quran further states:
Verily the most honourable among you in the sight of Allah is the one who is most righteous among you. (49:40)
Eid-ul-Adha is an occasion on which Muslims everywhere are encouraged to renew their commitment to making every kind of sacrifice for the spiritual, moral, social, and economic uplift of mankind and especially their own. If they make it a common cause and strive to manifest in themselves the attributes of God in accordance with the teachings and guidance of the Holy Quran and teachings of the Holy Prophet then, indeed, the message of Eid-ul-Adha would have borne fruit.
Referring to attaining Taqwa and excelling in spirituality, the founder of the Ahmadiyya Muslim Community, the Promised Messiah(as) said that we should love Allah as if we have died in His way. Just as we slaughter animals, we should consider ourselves slaughtered in the way of Allah. When anyone’s Taqwa is less than this, then it is not a sufficient level of Taqwa.
The significance of Eid-ul-Adha is obedience to the will of Allah and killing or suppression of one passion or greed.
The current World-wide Head of the Ahmadiyya Muslim Jama’at in His Message of Eid-ul Adha said that “It is a reminder that one should sacrifice oneself for a greater good. This greater good that a Muslim should always be ready to sacrifice oneself for is the Almighty God, by way of sacrificing their time, wealth, honour, and life.” He further said “Understanding the true spirit of sacrifice is even more important in this day and age where some nations are usurping the rights of others; where the blood of human beings is being wasted for minor worldly goals.

Remembrance of Allah and gratitude to Him is the hallmark of that day. There is the exaltation of Allah to and from the Eid praying ground. One significant aspect of Eid-ul-Adha is the slaughtering of animals. On the day of Eid those Muslims who can afford to sacrifice an animal are enjoined to do so after Eid Prayer. However, this aspect should not be taken as a do-or-die affair. The offering of animal as a sacrifice is only incumbent upon those who can afford to do so. With the prevailing increase in prices of all consumables including animals, many Muslims may not be able to buy rams for the Eid. The Almighty Allah knows our individual capacity and does not burden us beyond it. No Muslim should resort to un-Islamic means to offer this sacrifice.
We are grateful to Allah who out of His infinite mercy has given us the privilege to witness this year’s Eid-ul-Adha. We are more grateful because, last year, the Eid-ul-Adha prayers were offered at home by each family due to the Covid-19 pandemic. This year’s Eid prayer will be offered in congregation. This is an acceptance of prayers over last year. Given the resurgence of COVID-19, I urge all Muslims to observe the protocols released by the government to avoid the spread of the pandemic.
Message to Nigerian
We call on the Muslims of Nigeria to sacrifice with the spirit of obedience, respect, humility, and righteousness so that their sacrifices can be accepted. Accordingly, they should avoid all vices especially greed, stinginess, and miserliness in rendering genuine services with humanity. A larger portion of what is not sacrifice of the affluent will go waste.
We should remain prayerful. Nigeria is at the centre of war, feasible and infeasible wars. I pray that the wars do not consume us. Physical war, economic war, spiritual war, social war, intellectual war among others. May Allah help the poor masses to be able to taste the good of this world and the world to come.

We call on the government to approach the act of governance with act of sacrifice. In an economy where income is not sufficient to cover operating expenses, it will not be too much if all the political leaders in government in Nigeria can serve for free without salaries or any allowances. This is because, they are already well to do and it will be an act of sacrifice on their part is they can contribute to national economic recovery.
We draw the attention of the Press to the message of Islam that they should say only the truth and the right words. Similarly, we call on the government to allow good expressions even if it is against anyone to the extent that it is the truth and where it is not the truth, for the existing laws to deal with the same.
It is our wish that the government pay attention to the security of the people, economic emancipation and elimination of endemic corruption. We advise the government to desist from interest-based loans so as to avoid war with Allah.

We call on all Muslim leaders to stress the need for improved sacrifices based on righteousness as this is what Nigeria, and the world need at this time.
I wish you all Eid Mubarak.