ISTI’ADHA, BASMALLAH AND TASHAHHUD
It is a great honour to welcome you all to this press conference on this year’s 68th Jalsa Salana (Annual Conference) of the Ahmadiyya Muslim Jama’at of Nigeria, which is coming up on Friday, 23rd through Sunday, 25th of December, 2022 at the Jama’at’s Conference Ground at Jamiatul Mubashireen, Ilaro, Ogun State, Nigeria.
It is noteworthy that this 2022 edition of the Jalsa Salana is coming three years after it was last held in 2019 due to the constraints of the Covid-19 pandemic. In this respect, let me begin by rendering all praise and glorification to Allah the Almighty by Whose providence we have emerged from the pandemic and are now set to hold our first post-covid-19 annual National Conference. 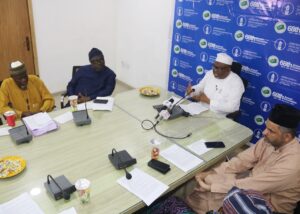 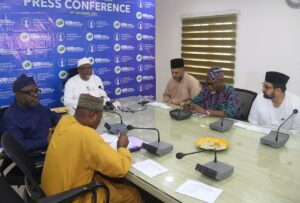 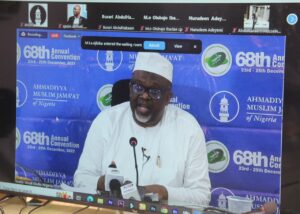 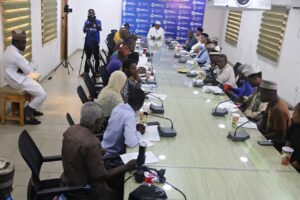 It is interesting to unfold that this 3-day religious gathering holding under the guidance of the World head of the Ahmadiyya Muslim Community, Hazrat Mirza Masroor Ahmad, Khalifatul Masih, V (aba) promises to be engaging and impactful, as it will explore the thought-provoking theme “Our Paradise is in our God.”
The rationale behind this God-centered theme is the need of our contemporary time where Nigeria in particular, and the entire world in general, have been wallowing in pervasive insecurity and lack of true peace and happiness due to humanity’s drifting away from the Ultimate God amid the unbridled pursuit of crass materialism in the form of acquisition of all forms of power, fame and wealth, among others.
In line with the teachings of Islam, it is the belief of the Ahmadiyya Muslim Jama’at that God is the Absolute Peace and Ultimate Source of peace, security, and prosperity, as the Holy Qur’an chapter 59 verse 24 declares: “He is Allah, and there is no God beside Him, the Sovereign, the Holy One, the Source of peace, the Bestower of Security, the Protector, the Mighty, the Subduer, the Exalted. Holy is Allah far above that which they associate with Him.” We will be focusing on Allah and His Attributes. 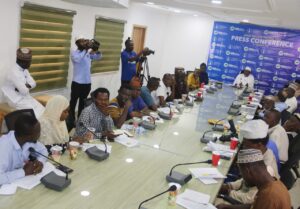 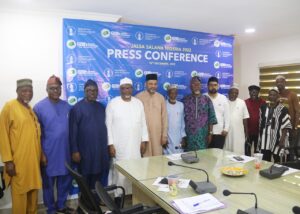 The logic is that, since Allah is as described, then all human individual, national and global interests in achieving real prosperity and true peace, security, and happiness can only be realized through recognition of the centrality of the place of Allah in the destiny of humanity; and through total submission to His Will and commandments and worship of Him to gain nearness to Him and harvest both spiritual and material bounties from Him. Clearly, this cannot be realized through ungodly and corrupt means which, sadly, have been characterizing world’s pursuit of crass materialistic interests and goals, as evident in our politics of bitterness and selfishness, pervasive embezzlement of public funds, terrorism and incessant killings, rampant kidnapping for ransom or ritual and other various fraudulent practices, fictitious subsidy and overburden interest affecting all facets of our individual, national and global affairs.

To explore and dissect the various important dimensions of this God-centered theme, various lectures to be delivered by erudite scholars have been slated for the event. They include: Recognition of Allah: Panacea to the World problems; Our Paradise is in our God,; Khilaafat: The Rope of Allah; The Promised Messiah’s Absolute Trust in Divine Help; Growing the Jama’at morally and spiritually; and Hadrat Abdur Rahman bin ‘Auf and Hadrat Maulana Ghulam Rasool Raajiki Sahib: Two pious examples of relationship with Allah Almighty, among others.

Furthermore, in line with the long tradition of the Jama’at in the area of advocacy and promotion of education for all, there will be academic awards to members of the Ahmadiyya Muslim Jama’at of Nigeria who distinguished themselves in academics in the last three years from various institutions of higher learning at home and abroad.
Other features of the event will include an exhibition, solemnization of mass nikah (marriage), and medical outreach, among others.
It is also worthwhile to note that, apart from over 70 thousand expected participants at the three-day event, a number of very important personalities from various leadership strata of Nigerian society, including political, religious, traditional, and other leaders are expected to grace the historic event.

In the same vein, as love for one’s nation has been declared in a Prophetic Tradition as part of faith, the conference will also hold special prayer sessions for the success of the forthcoming 2023 elections in Nigeria that Allah, Who is the Ultimate Elector, may choose for us leaders of His own choice at all levels of political leadership in the country.
Importantly, I would like to impress the fact that the holding of Jalsa Salana is a long tradition within the fold of Ahmadiyya that dates back to December 1892 when the Holy Founder of the Ahmadiyya Muslim Jama’at, Hadhrat Mirza Ghulam Ahmad (as) held the first ever annual conference. Ever since then, it has become an annual tradition across the over 200 countries and territories where the Jama’at has been established. Declaring the fundamental purpose of Jalsa Salana, He (as) stated in a published announcement that:
“The primary purpose of this Convention is to enable every sincere individual to personally experience religious benefits they may enhance their knowledge and due to their being blessed and enabled by Allah, the Exalted, their perception may progress.
Among its secondary benefits is that this congregational meeting together will promote mutual introduction among all brothers, and it will strengthen the fraternal ties within this community…

“It is essential for all those who can afford to undertake the journey that they must come to attend this convention which embodies many blessed objectives. They should disregard minor inconveniences in the cause of Allah and His Prophet (saw) at every step of their way, and no labour and hardship undertaken in His way ever goes to waste. I reemphasize that you must not rank this convention in the same league as other ordinary human assemblies. This is a phenomenon that is based purely on the Divine help for propagation of Islam.” (Ishtihar, 7 Dec.1892, Majmū’ah Ishtiharāt, vol.1, page 341)
Of course, the holding of this annual conference is in line with the Qur’anic imperative declaration that: “There is no good in many of their conferences except the conferences of such as enjoin charity, or goodness, or making of peace among men. And whoso does that, seeking the pleasure of Allah, We shall soon bestow on him a great reward.” (Qur’an, 4:115). 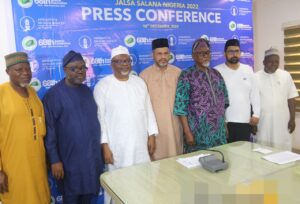 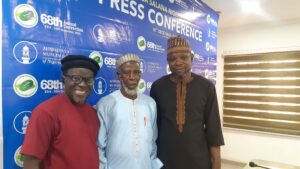 In conclusion, no better way to close this address other than the same way the Holy Founder of the Jama’at (as) has concluded his announcement on the first Jalsa Salana, saying that “I conclude with the prayer that everyone who travels for (attending) this Conference that is for the sake of Allah, may Allah the Exalted, be with him, reward him in abundant measure, have mercy on him, ease up for him his circumstances of hardship and anxiety and eliminate his anguish and grief….

May He be their Guardian in their absence until after their journey comes to an end. O, Allah! O Sublime One and Bestower of bounties, the Ever-Merciful and One Who resolves all problems, do grant all these prayers, and grant us victory over our opponents with scintillating signs because You alone have all the prowess and power. Āmīn!” (Ishtihar, 7 Dec.1892, Majmū’ah Ishtiharāt, vol.1, page 341)

100 Years Ago… – News from Jamaats around the world

WW3 is on the Horizon – Find out how together, we can #STOPWW3 – Join Our Campaign

The Messiah Has Come