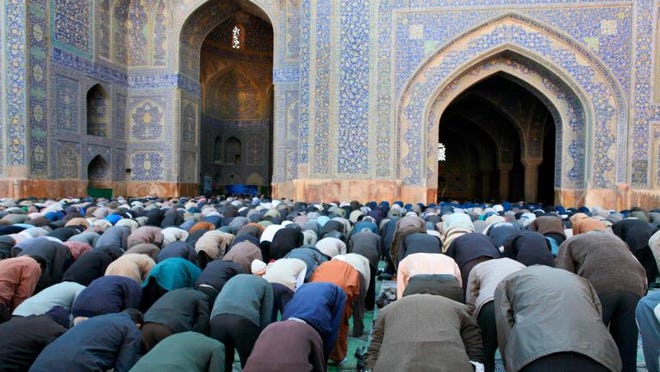 (3) Misconceptions of Socio-religious Doctrines and Concepts

The belief and practice of conversion of the whole humanity and the establishment of Islamic states in the world through the use of force and violence is a deep-rooted and widespread agenda in the contemporary mainstream Muslim world. Muhammad Abdussalam Faraj, citing authority of the medieval Muslim scholar, Ibn Rajab al-Hanbali, declared that: “the saying of the Prophet: “I have been sent with the sword”, means that Allah sent him for the call of Tawheed of Allaah by the sword after his call for it by evidence. Sowhoever does not accept the call of tawheed (the Oneness of Allaah)by the Quran, evidence and eloquence, he will be called by thesword.” [41]

Similarly, Maududi insists that ‘Anyone who wants to uproot mischief and disorder from the world and wants to reform mankind should realize that he cannot do so by mere sermonizing and counseling. It is useless. He should rise against the government of false principles, he should seize power, remove the wrongdoers from author and set up a government based on sound principles and just administration.’[42] Again, he declared that ‘If their Islamic state has power and resources it will fight and destroy non-Islamic government and establish Islamic states in their place.’ [43]

Ahmadi thought opines that the philosophy and true nature of Jihad is a matter both complex and subtle. Grave errors have been made both in our age and in the middle age
[of Islam]because people failed to understand the subject. [44]

The Holy Quran clearly forbids the use of force for the spread of the faith and directs its propagation through its inherent qualities and good example of the Muslims. It maintains that people should not be misled by the notion that in the beginning the Muslims were commanded to take up the sword. That sword was not taken up for the spread of the faith, but in self-defence against the enemies of Islam and for the purpose of establishing peace and security. It was no part of the purpose of taking it up to have recourse to coercion in the matter of faith. [45]

Ahmadi thought builds this position on various Qur’ānic verses among which is the verse that provides Muslims with the rationale and permission to fight in defense of the faith and freedom of religion and worship: “Permission to fight is given to those against whom war is made, because they have been wronged and Allah indeed has power to help them. Those who jave been driven out of their homes unjustly only because they say our Lord is Allah. And if Allah did not repel some people by means of others, there would surely have been destroyed clusters and churches and synagogues and mosques. (Q. 22: 40-41)

[B] Mainstream Muslims’ Misconceptions of Ideal Martyrdom in Islam

Another Islamic doctrine that has been subjected to such extremist re-interpretation and radically applied is the concept of martyrdom in Islam. This is evidenced by the so-called contemporary radical Islamist-Jihadists’ martyrdom operations or suicide terrorism, or the erroneously tagged ‘Islamic martyrdom’ achieved through the various terrorist groups and operations, internal civil wars or inter-state political wars being engaged in by some Muslim individuals, groups and governments in the name of Islam.

This has come as a result of a major reinterpretation of the theological basis and religious law on martyrdom and the military jihad advanced by Shi’ite theologians and jurists in Iraq and Iran between the mid-1960s and the late 1970s.” Prominent among such Shia scholars were Ayatollah Taleqani, Dr. Ali Shariati, Nimatollah Salihi Najaf-abadi, Ayatollah Khomeini. Particularly, having invented a typology of Imam Husain’s martyrdom, which they re-interpreted as a self-imposed kind of martyrdom, they therefore went ahead to propound a new concept of martyrdom which sanctions self-annihilation, a suicide martyrdom which does not see martyrdom as shahadah i.e. a death unjustly and violently inflicted upon Muslim faithful by their opponents, but, as istishhadah i.e. one which Muslims personally desire for themselves as an expression of self-sacrifice for the cause of the faith. [48]

Ahmadi thought redefined the pristine meaning of a true Islamic martyr or Shaheed “as the person who attains the power of steadfastness and resolve from God, that no upheaval or shock can shake him or move him from his stand. He bravely faces adversities and difficulties to the point that if, just for the sake of God, he has to give his life, then, he is given extraordinary resolve, and ever prepared to presents his head without any sorrow or disappointment. [49]

In this light, it is thus obvious that the fundamentally true and ideal Islamic martyrdom as sanctioned by the Holy Quran and the Holy Prophet is the one which is attained principally as a result of peaceful profession of, adherence to and advocacy for one’s faith in Allah; conditionally, because one is engaging in struggle [jihad] to defend the cause of Allah; and objectively, because one desires to establish the supremacy of the Word of Allah on earth.

Thus, Ahmadis safely conclude with conviction that there is no valid Quranic and Prophetic evidence which provide sanction and justification for conceiving or depicting as fundamentally Islamic martyrdom: (1) the deaths of Muslim soldiers, rebels and insurgents who fall in the course of political wars waged for gaining political power or other worldly objectives; (2) the martyrdom operations or suicide terrorism being perpetrated by various so-called Muslim Jihadist/Islamist groups of Al-Qaida or the ISIS or Al-Shabbaab and Boko Haram etc.

Furthermore, Ahmadi thought insists that, although a Jihadist may have reasons for embarking on a suicide bombing mission to kill unsuspecting, non-combatant and innocent civilians, but there can be no Islamic moral justification for such an act; and it would be grossly wrong to confuse the two: reason and justification. [50]